In this article, I will showcase visualizing a dataset containing categorical and numerical data, and also build a pipeline that deals with missing data, imbalanced data and predicts a binary outcome. The original dataset can be found on Kaggle, and full details including all of my code is available in a notebook on Kaggle.

Initial Peek at the Data

Before jumping into the data visualization, it’s good to take a look at what the meaning of each feature is:

We can see the dataset includes numerical and categorical features, some of which have high cardinality.

Simple countplots and histogram plots of features can give us a general idea of how each feature is distributed.

There are a few interesting things to note from these plots. First, the prediction target is severely imbalanced (far more target=0 than target=1). Second, some of the features are similarly imbalanced, such as gender. Third, we can see that multiple features have a significant amount of missing data (~ 30%). The pipeline I built for prediction reflects these aspects of the dataset.

But first, let’s take a look at potential correlations between each feature and ‘target’.

What factors are affecting an employee’s decision?

First, I’d like take a look at how categorical features are correlated with the target variable. In order to control for the size of the target groups, I made a function to plot the stackplot to visualize correlations between variables. The stackplot shows groups as percentages of each target label, rather than as raw counts. 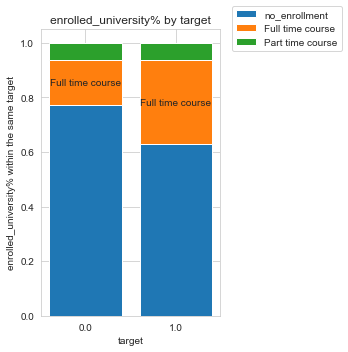 Visualize the correlations between numerical features and target

I used violin plot to visualize the correlations between numerical features and target. A violin plot plays a similar role as a box and whisker plot. It shows the distribution of quantitative data across several levels of one (or more) categorical variables such that those distributions can be compared.

This is the violin plot for the numeric variable city_development_index (CDI) and target. We can see from the plot there is a negative relationship between the two variables. 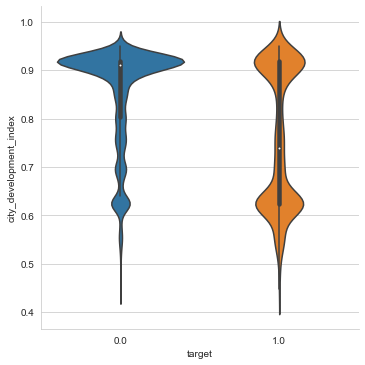 More specifically, the majority of the target=0 group resides in highly developed cities, whereas the target=1 group is split between cities with high and low CDI.

The pipeline I built for the analysis consists of 5 parts:

After hyperparameter tunning, I ran the final trained model using the optimal hyperparameters on both the train and the test set, to compute the confusion matrix, accuracy, and ROC curves for both.

The relatively small gap in accuracy and AUC scores suggests that the model did not significantly overfit. Thus, an interesting next step might be to try a more complex model to see if higher accuracy can be achieved, while hopefully keeping overfitting from occurring.